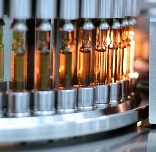 Chromatography additives can make a drastic improvement in both separations and ionization. The level of product refinement is critical to the successfully implementing mobile phase additives into your chromatagraphy and spectrometry applications. CovaChem's LCMS and HPLC additives are some of the most highly refined chemicals in the industry, making them ideally suited for sensitive HPLC and LCMS applications.

One of the pre-requisites for LCMS buffers is that the mobile phases prepared, and all mobile phase additives, should be volatile. This is one of the reasons why buffers such as Sodium Phosphate are not commonly relied upon for LCMS applications. Although many inorganic buffers lend themselves to excellent separations and effectively mask charged groups which cause poor peak shape (ie. tailing and fronting), they are typically unsuitable for LCMS due to their lack of volatility.

In both LCMS and HPLC applications, it is critical that mobile phases consistent of very highly refined components that are free of interfering contaminants, metal contaminants, and other non-volatiles. Consistent composition of mobile phases is also important, as small variations in concentration and pH can be the difference between adequate separation or not. Not only does CovaChem carry the highest quality buffers for LCMS and HPLC applications, but it is conveniently packaged in multiple packaging sizes, including 1 mL ampules, for easily and accurately preparing one liter of 0.1 % buffers in either water or organic phases. CovaChem also offers custom ampule packaging, for your own mixture and volumes. Call today +1-815-315-1271 for more information.